After the Hokkaido squash Chaï Latte recipe, let’s continue on the « Winter and comfy recipes » way with those stuffed brioches. Even though full of calories, this recipe has everything to make you and your love handles totally happy: Reblochon cheese, Pulled pork, and caramelized onions among other tasty ingredients, what more could you ask for? Well, whatever I claim about fat and tasty food, I still went for a 20k run on the next morning to limit the dietetic damages afterwards. It’s quite easy in Germany to find some « ready-to-eat »pulled pork  in supermarkets – I guess it’s useless to describe you the incredible joy I felt when I made this discovery… -. However, if you don’t have this chance in your city and you have 4h30 left, then you can prepare it by your own.

1. Prepare the brioches: in a salad bowl, stir the spelt flour, the yeast the tepid water and the milk together. Add the salt, the eggs one by one, then knead the dough until it gets homogeneous. Incorpore gradually the soft butter while continuing. After approximately 10 minutes, the dough might be elastic and not too sticky anymore.

2. Cover the salad bowl with a towel and let rest the dough during 1h, it might double – the processus will be even more efficient if you let the bowl around a heater -. Once the dough doubled, separe it in two parts and knead them again a little bit. Butter and flour 2 little moulds, then add the bowls inside – or just let them inflate on a baking tray, I didn’t like that much the shape that my brioches got in the moulds -.

3. Let them inflate again during 1h. Once they doubled, put them in the oven still cold, and let them bake for 25 minutes at 160C. To avoid to obtain dry brioches, place a bowl of water as well. The brioches must be a bit glazed on the top. Let them get tepid, them cut a hat and hollow out each of them.

4. Prepare the stuffing: fray the pulled pork if  not already. Mince the onion in small cubes, then make it sweat in a frying pan. Slice the borwn mushrooms and add them to the pan. When the whole seems well-baked, incorpore the maple syrup and stir well. Let bake a few minutes more, until the onion and the mushrooms get caramelized.

5. Mince the red cabbage in thin slices, then make it brown in another pan for a few minutes, with some fat. Salt and pepper as much as you wish. After approximately 10 minutes, deglaze it with some red wine and let cook a few minutes. When the wine is mainly absorbed, add the mixed seeds to the pan and brown them for a while more. Cut the quarter of Reblochon in 2 in thickness. 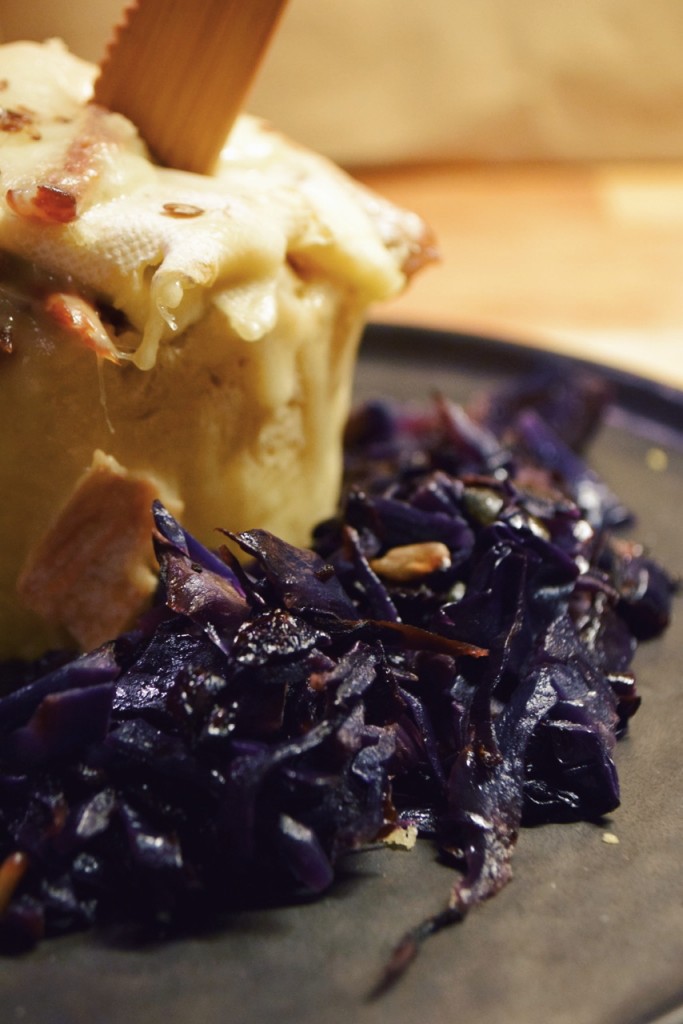