For the second and last part of my Ukrainian culinary discoveries, I take you to Odessa, this city located on the seaside of the Black sea. On the Ukrainian cuisine side, there are not so big differences with Kiev, you can find there the same dominant features concerning the restaurants, which are very varied in Odessa. There is also a lot of Georgian cuisine and fish places – did I already mentioned how much I miss that in Berlin? -. A small market is also situated straight in the city center and proposes a wide choice of street food. 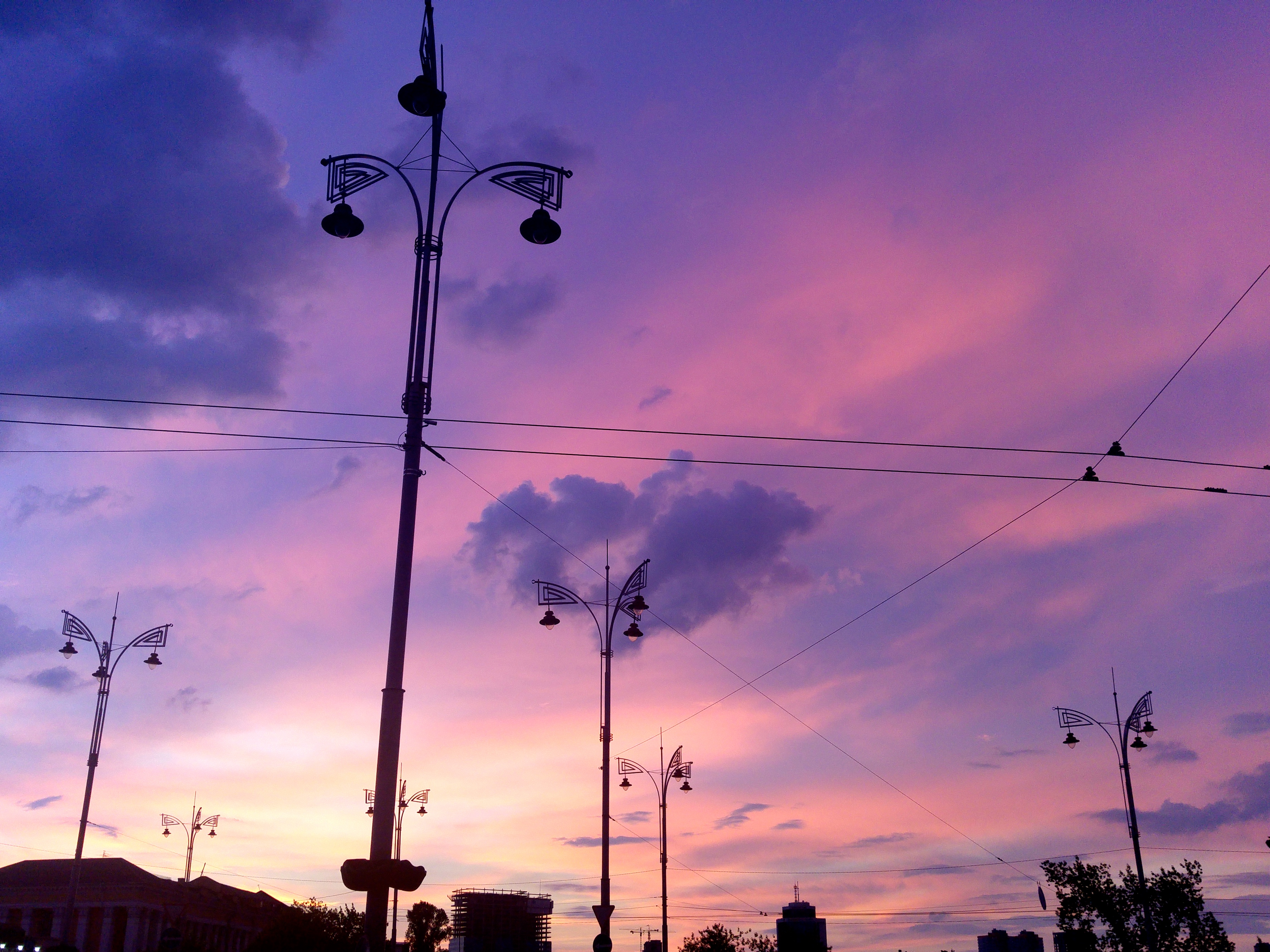 I also didn’t know what to expect before to arrive to Odessa, excepting maybe being able to enjoy the sea for a few days. The connection with the Ukrainian capital is very easy, we took the night train from Kiev-Odessa for a ridiculous price (again) turning around 15€, which arrives to Odessa right on time for breakfast ;) The atmosphere is totally different than the one in Kiev, mainly with the presence of the sea that gives a permanent holidays feeling. The standard of living is however much more contrasted compared to the capital city, but the inhabitants are still super welcoming. 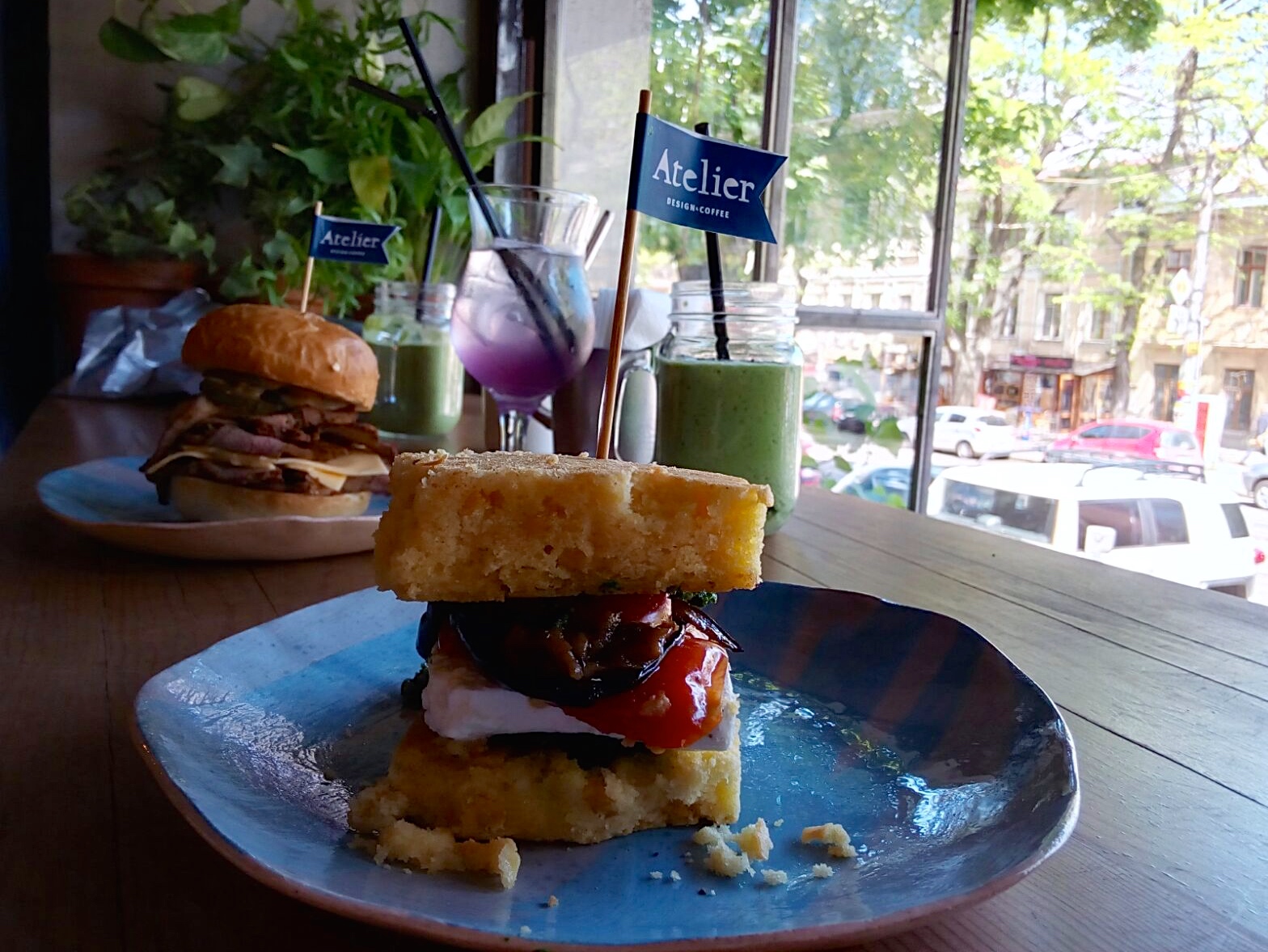 We landed at Atelier for lunch while being famished, taking somehow the first spot  that was slipping through our fingers, and we definitely didn’t regret our choice. This café with an industrial style decoration is typically the kind of café that you could easily find in Berlin, a tad hipster with numerous healthy options coming along with the burgers and croques that are served – I mainly think about the chalk board with the « keep calm and no sugar » mention written on it, which made me smile as I was just ending my 8 weeks without sugar-. I chose the corn muffin with goat cheese, grilled vegetables and pesto while fearing to end up with a tiny portion, but at the end we all left the place satisfied and with a round belly: the dishes are simple and get to the point but the flavors are right here. The basil smoothie that I took was also perfectly fitting with the hot weather of the day; I still desperately try to imitate the recipe at home, unfortunately my homemade green smoothies attempts are still super disgusting. The waiter was also very friendly and gave us a few good hints to hang out in Odessa. 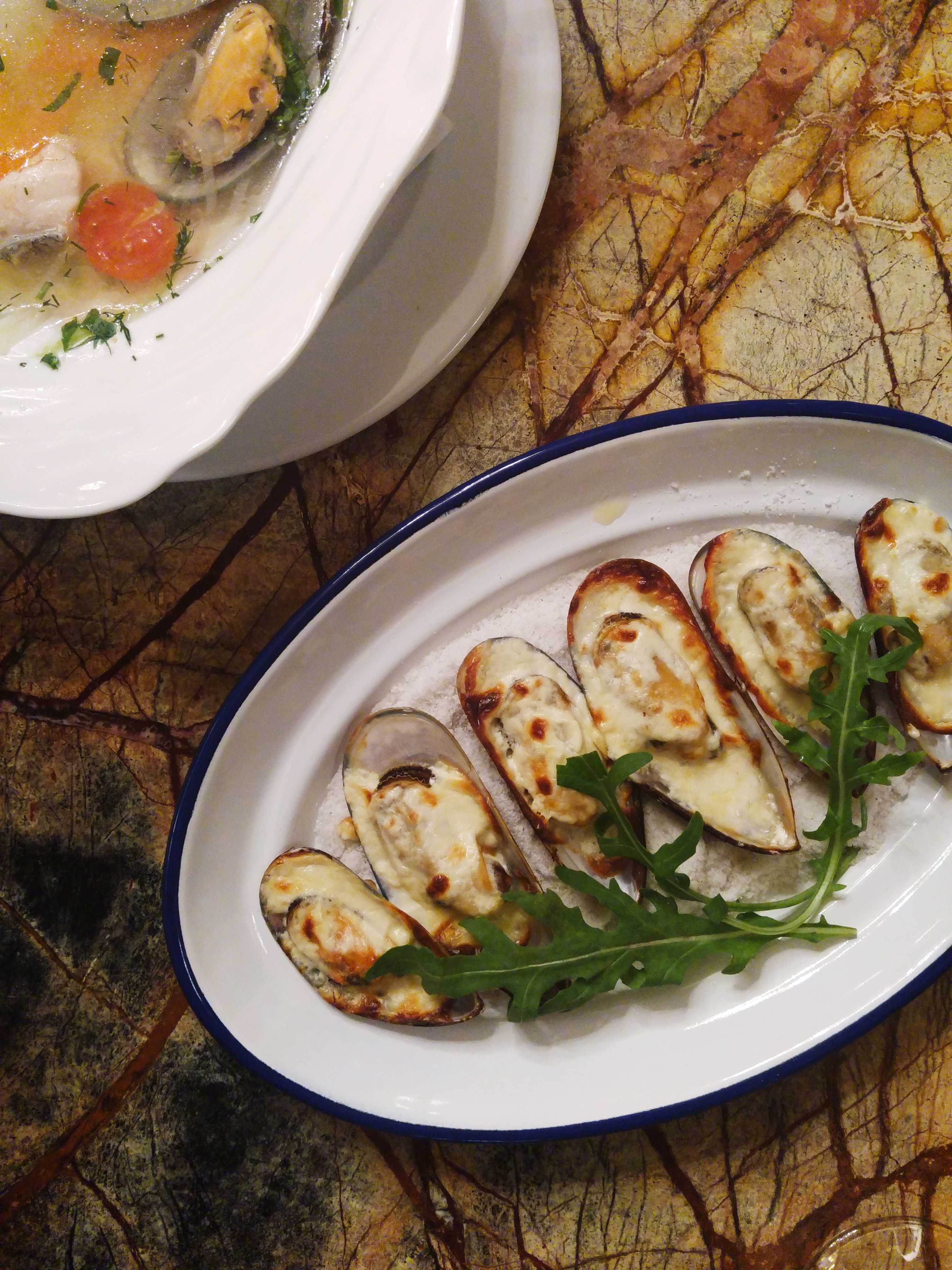 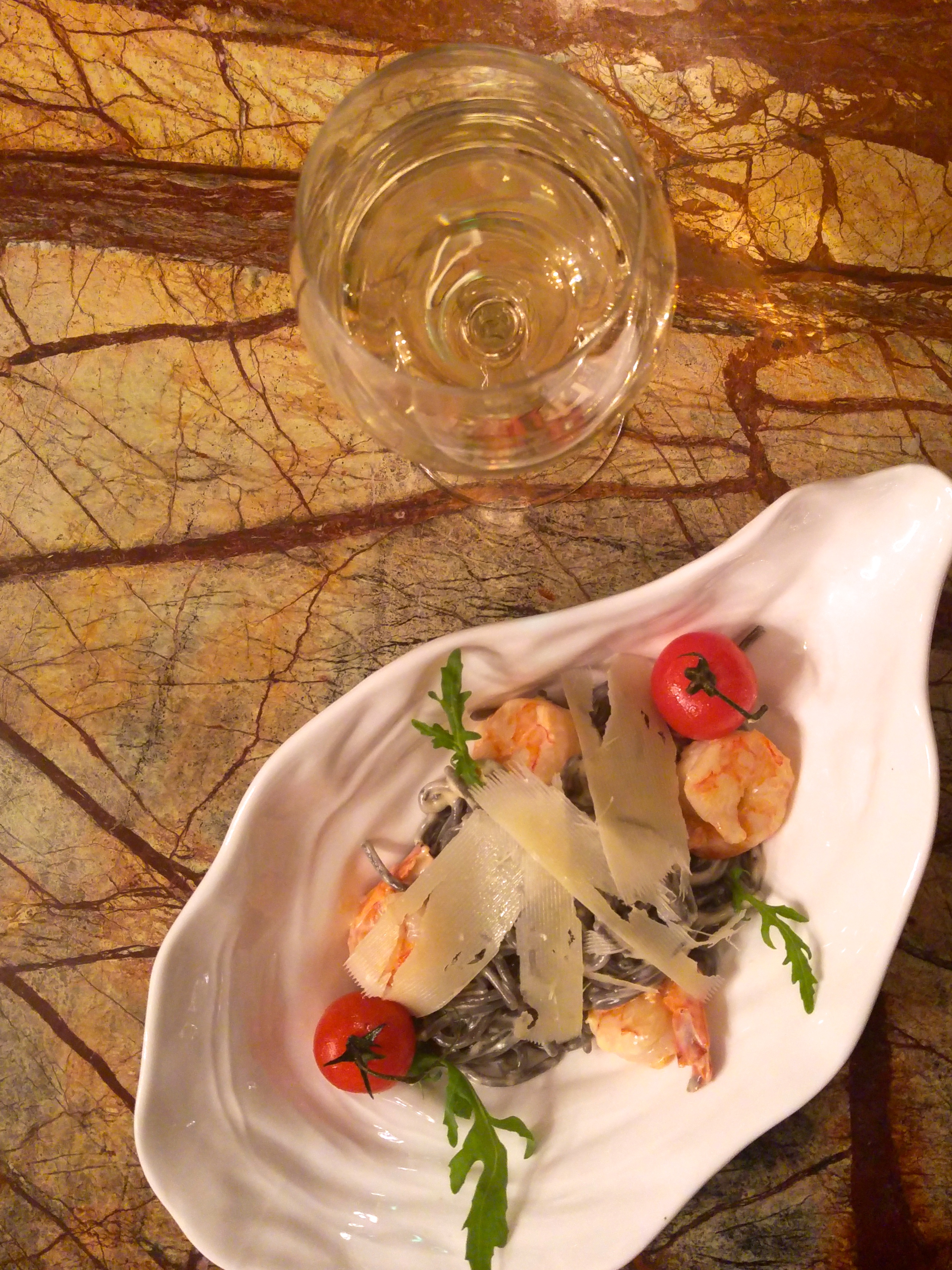 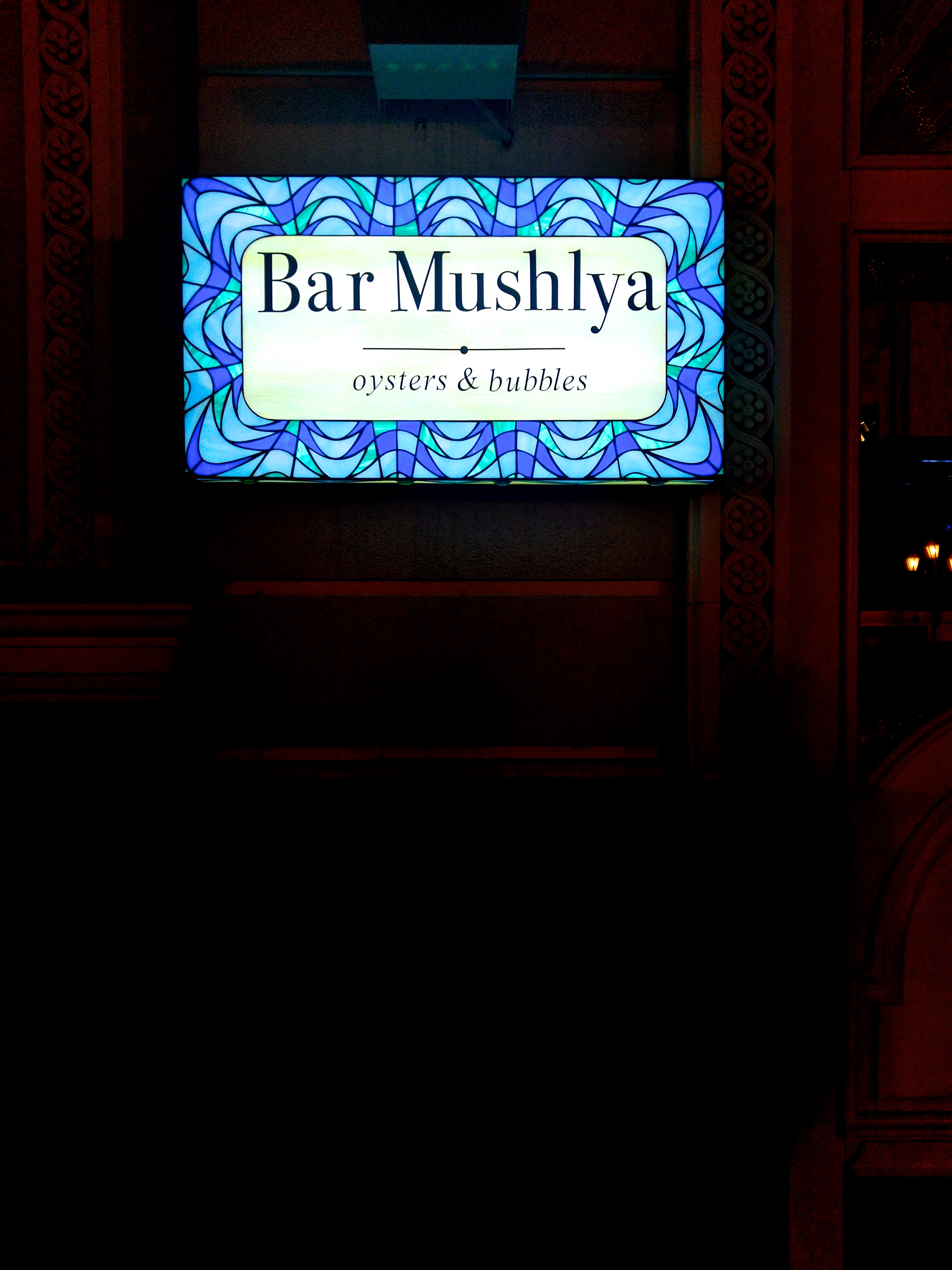 Bar Mushlya is the perfect compromise for a fresh diner right next to the sea. The place is quite stiff and it’s definitely not the kind of place where I would go everyday in France or Germany, but the prices in Odessa where more than decent, which imply: we basically ate until being completely full. The menu is unfortunately not available in english, which is quite frustrating when you don’t read/speak at all the local language, but the waiter took time to tell more and advice us about the served dishes. As well the meltingly soft and perfectly cooked tuna steak as the ink squid spaghetti with gambas, and passing by the blue cheese mussels, all the dishes were made with the greatest of care. And it’s even more enjoyable if it happens when you’re cruelly missing fish and seafood where you’re living. 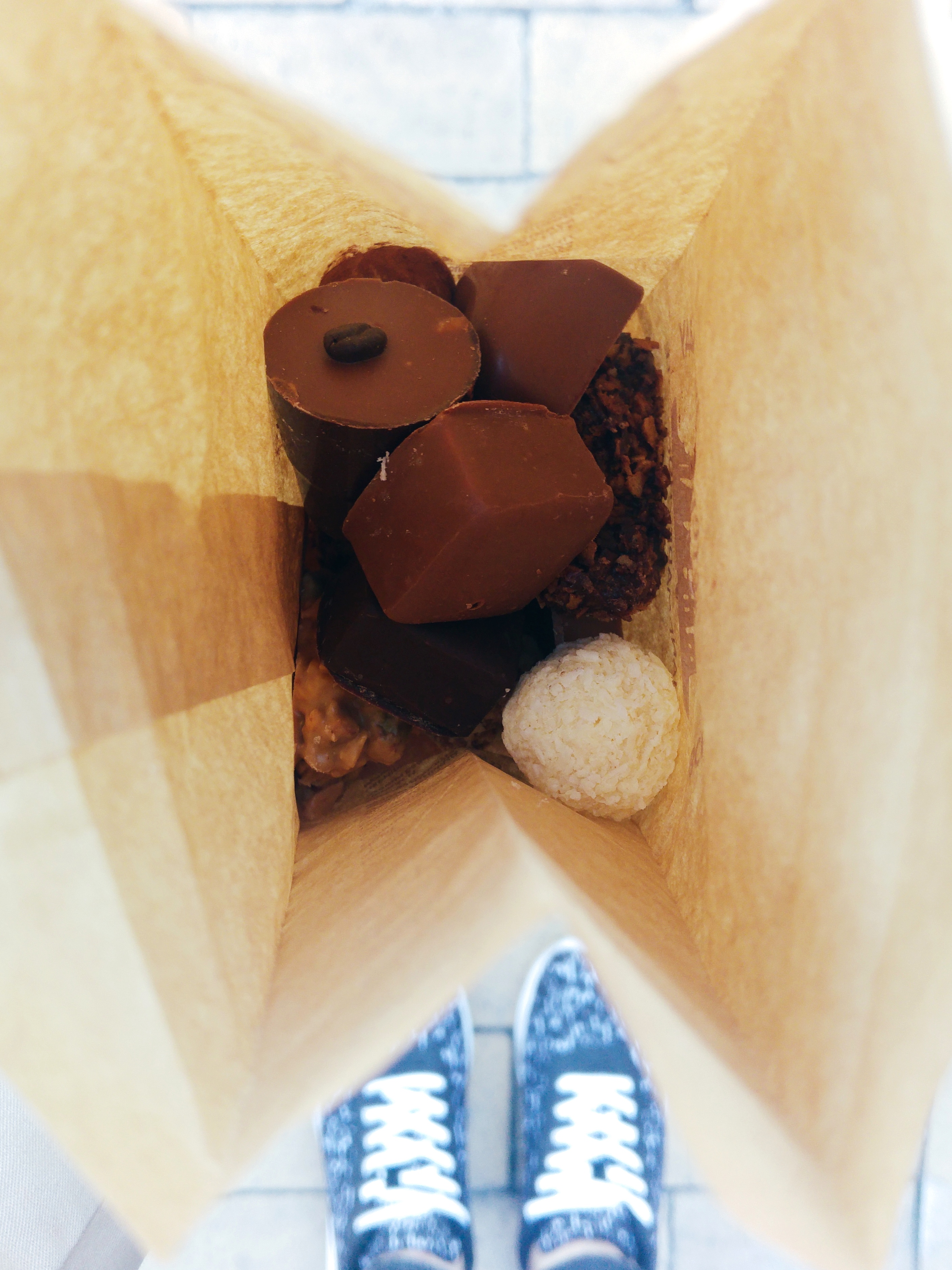 Lviv handmade chocolate is a chocolate shops chain mainly based in the biggest cities in Ukraine. The first time we went there was in Kiev, then we finally went back after having wrecked our first round of chocolates. The choice is not missing and the prices are interesting, and to be totally honest I preferred those ones much more than the belgian chocolates I ate in Brussels last year, way too fat in my opinion. I advice you to give a try to the pralines stuffed with crispy things (biscuits, nuts,…), which are excellent and perfect for sweet tooth. The shops also serve as cafés, and I heard that the pastries were also pretty fine even though I haven’t tried them. 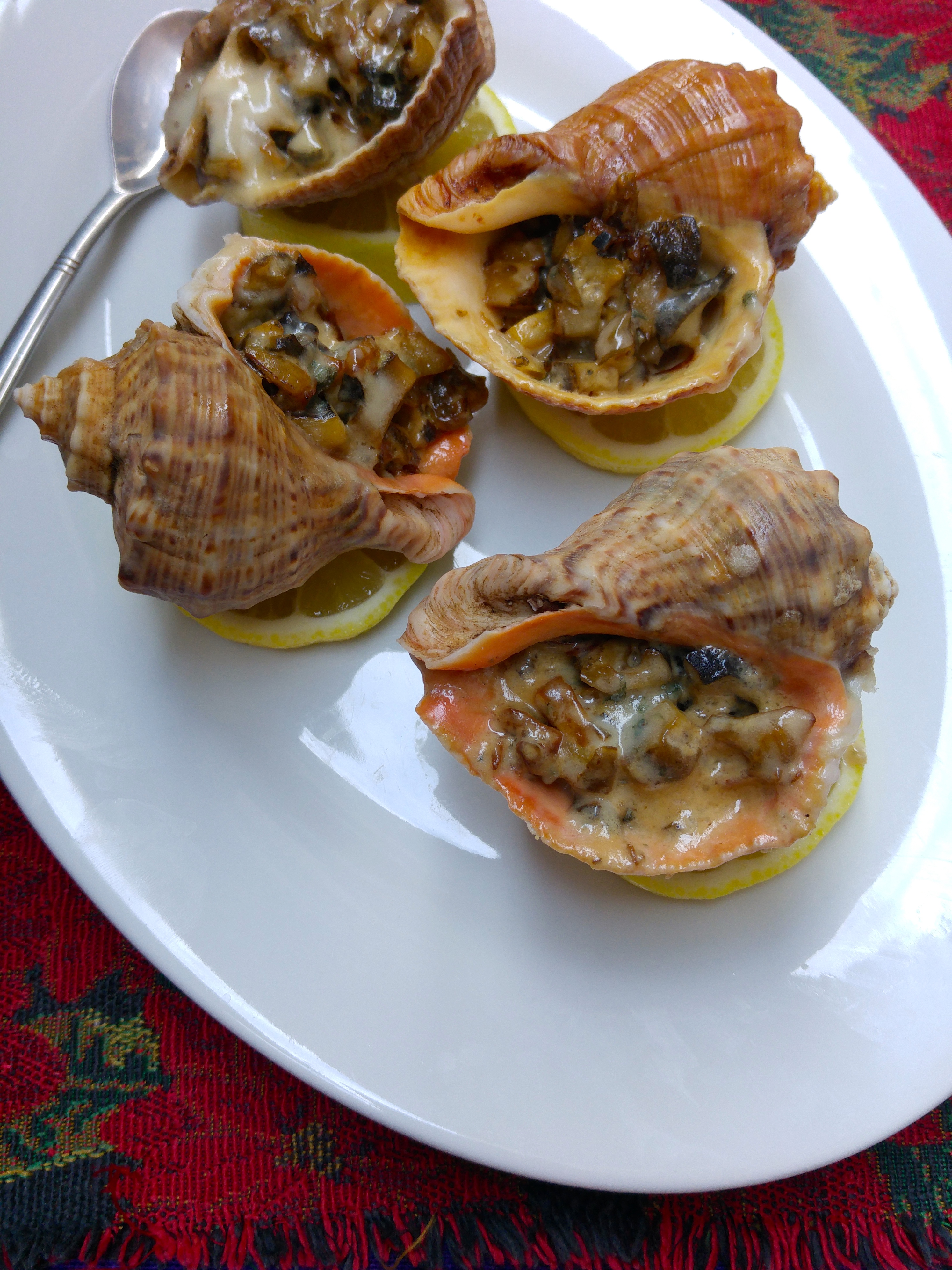 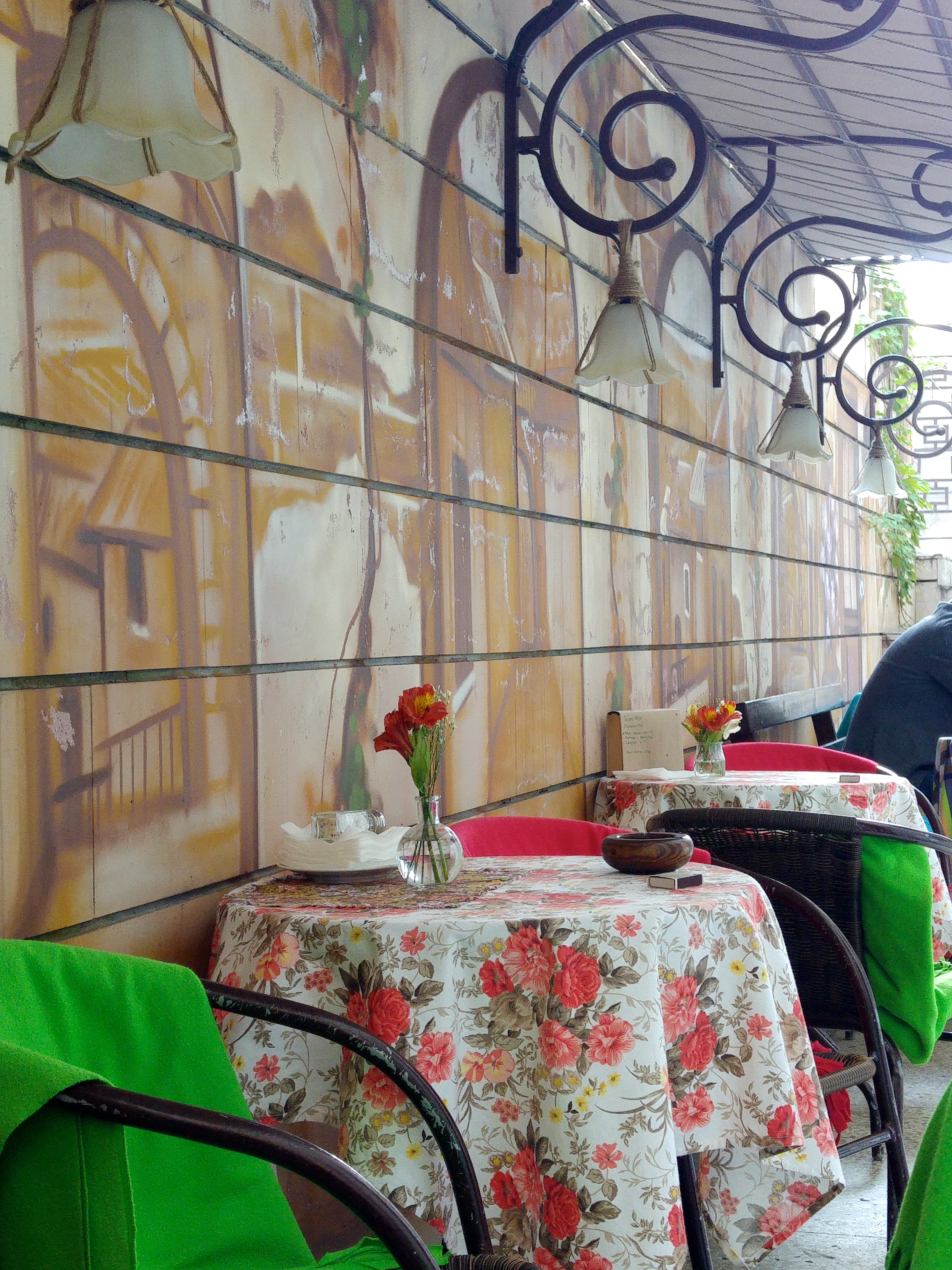 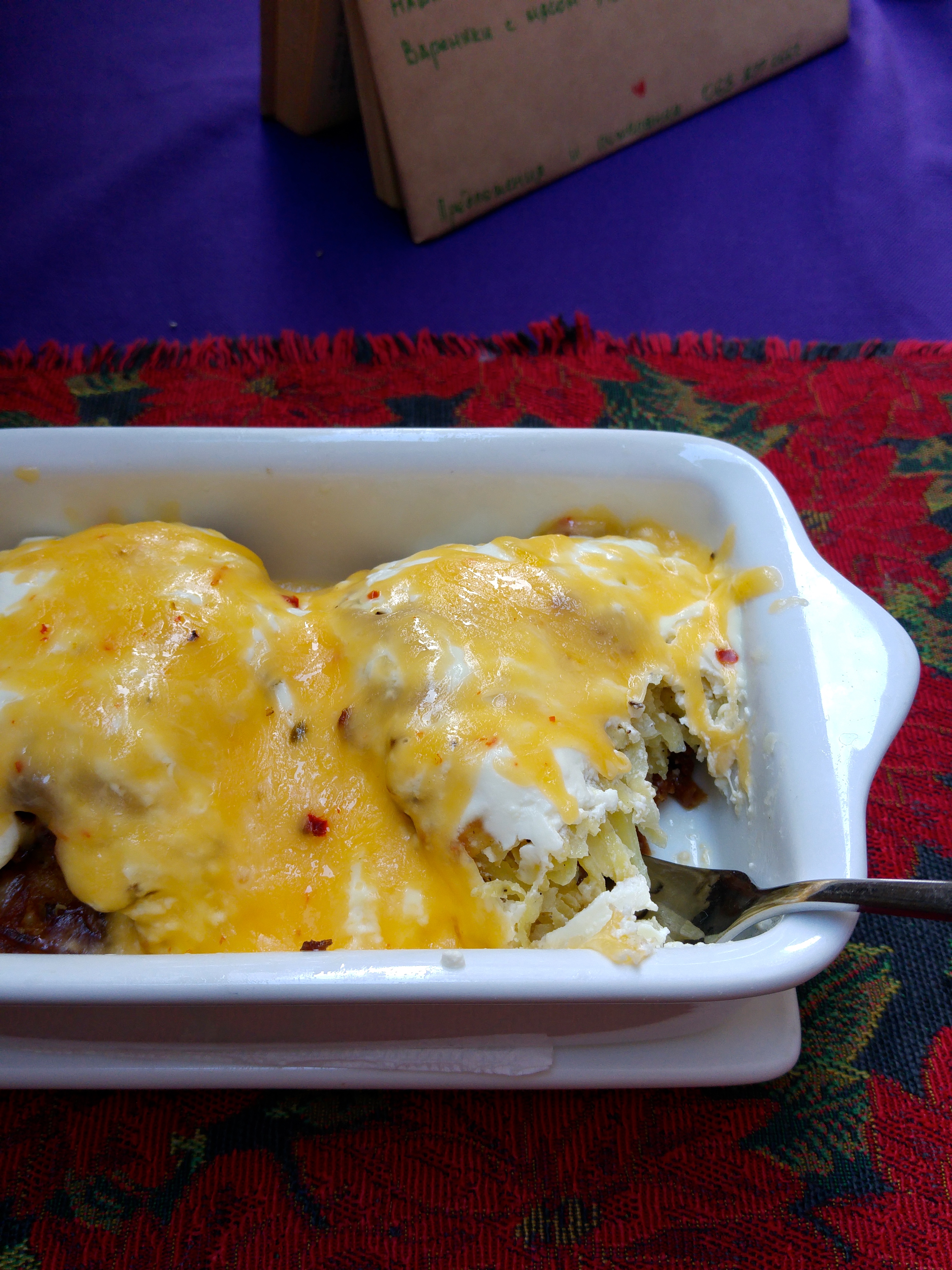 Grechka doesn’t look that amazing from the outside – if you succeed to find it as the entrance and terrace are situated at the bottom of small stairs overlooking on the street -, but it’s one of those typical places with no fuss and much appreciated by local people. We tried there many Ukrainian specialities as the famous Varenykys, the cheese dranikis – which are kind of röstis topped with some Smetana cream then baked in the oven with some cheese on it -, or even the blue cheese rapanas, those mollusks that slightly reminded me the taste of scallops. As I was saying in my Kiev food guide, the local food is very tasty but also very filling – which actually helped me for my 25k race a few days after, thanks to the load of carbs I ate during my journey! -, don’t expect then to be totally able to enjoy the local specialities if you are dieting. The prices at Grechka are very affordable and the serving sizes very generous. 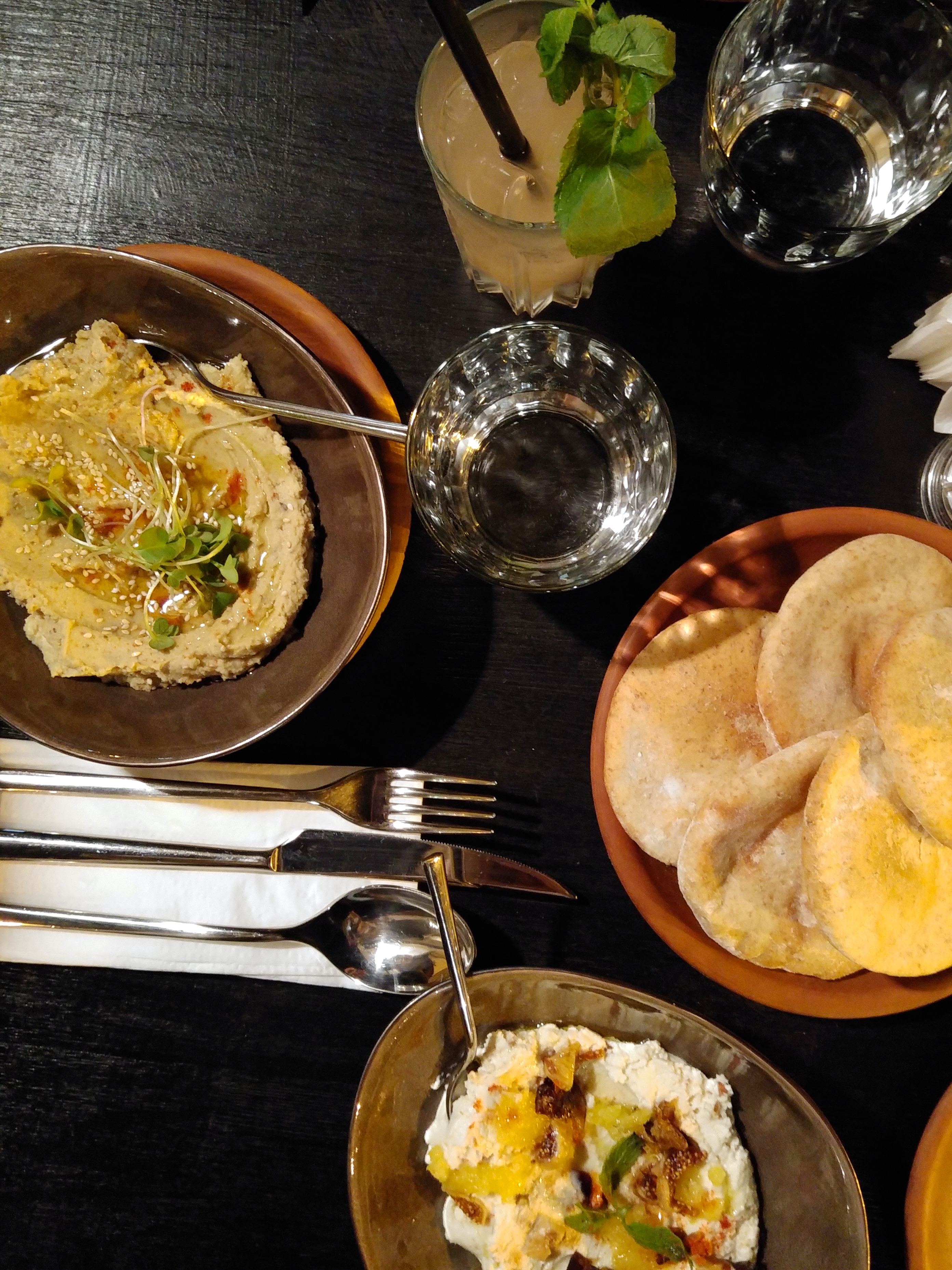 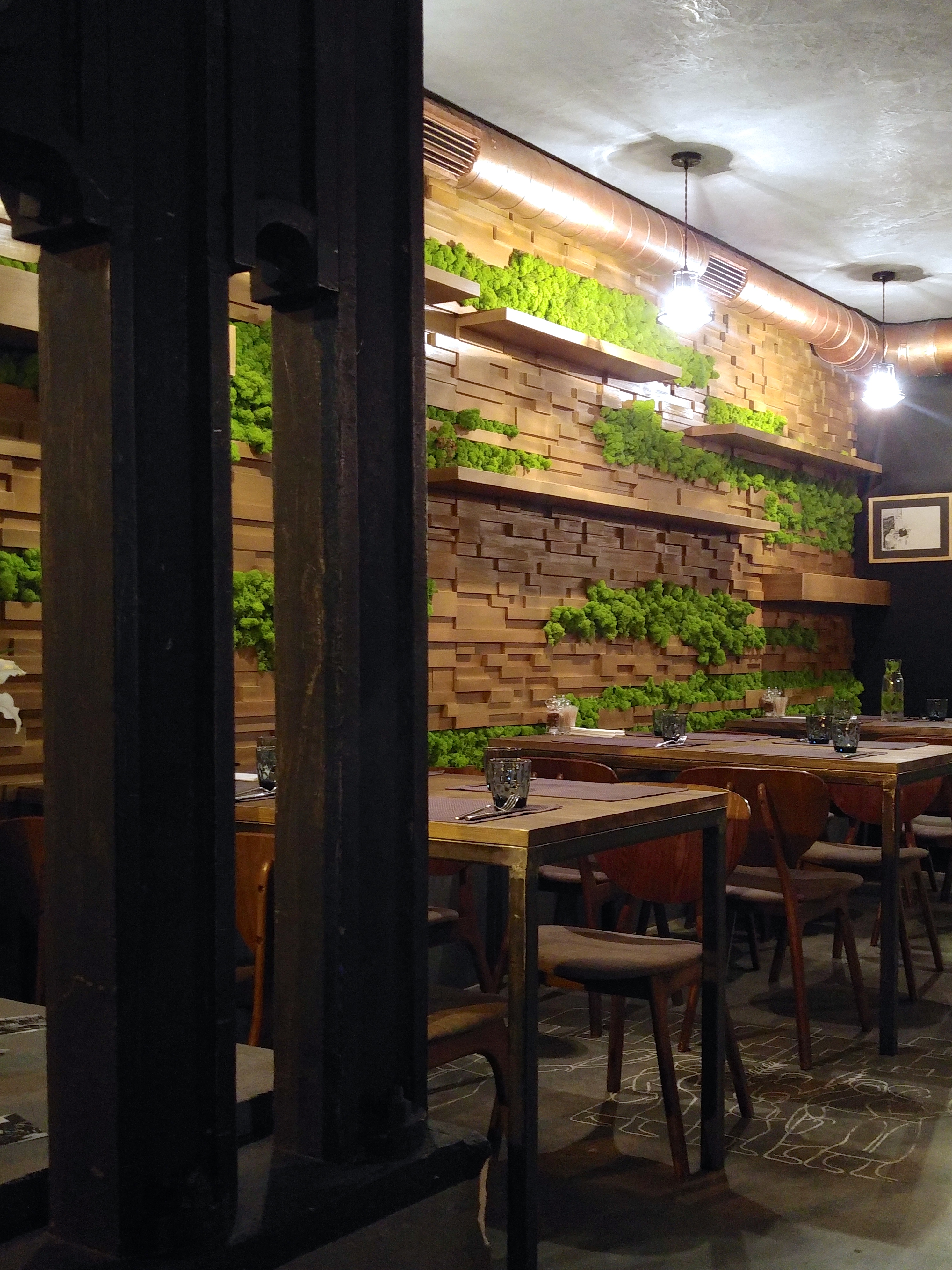 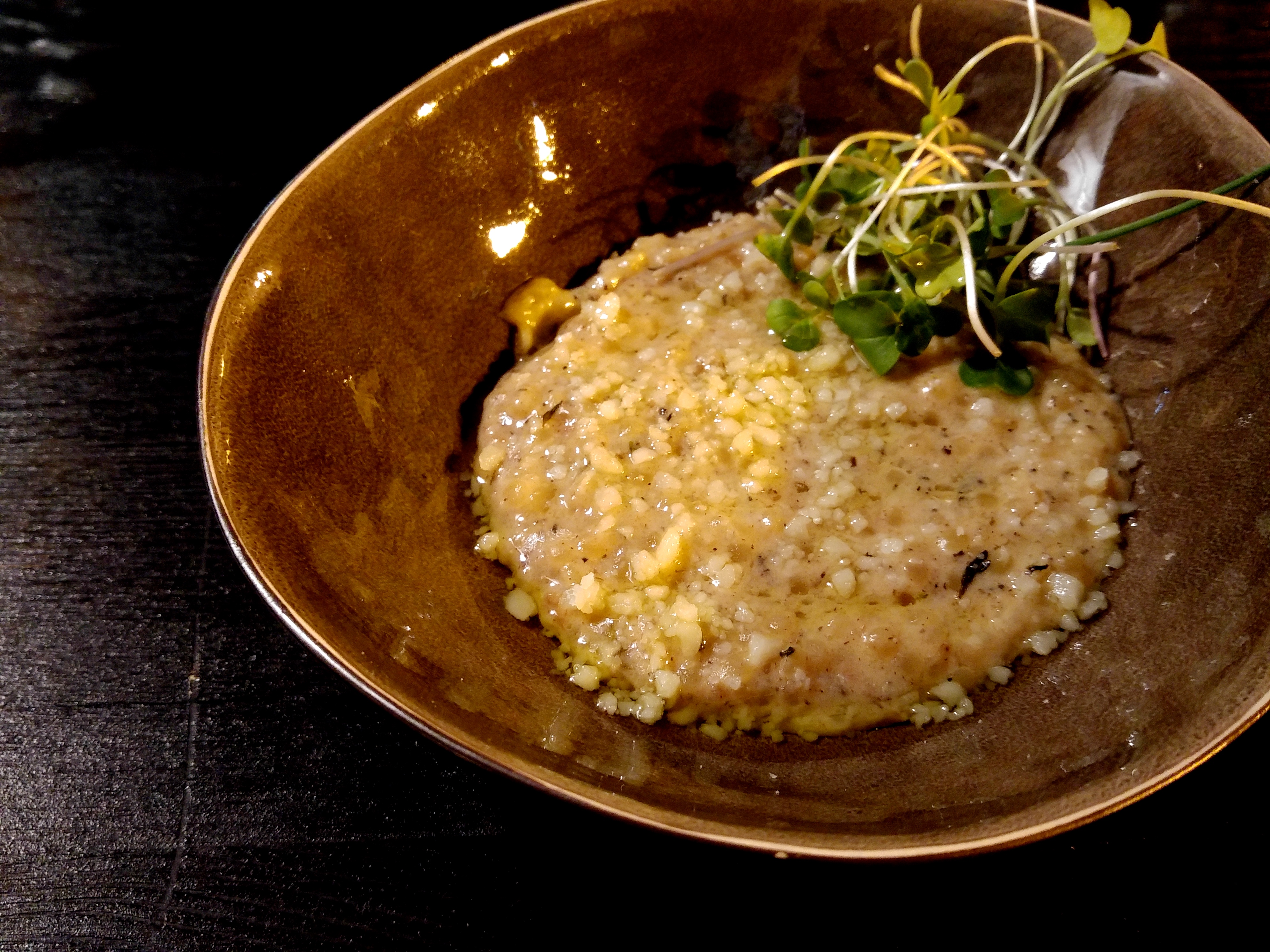 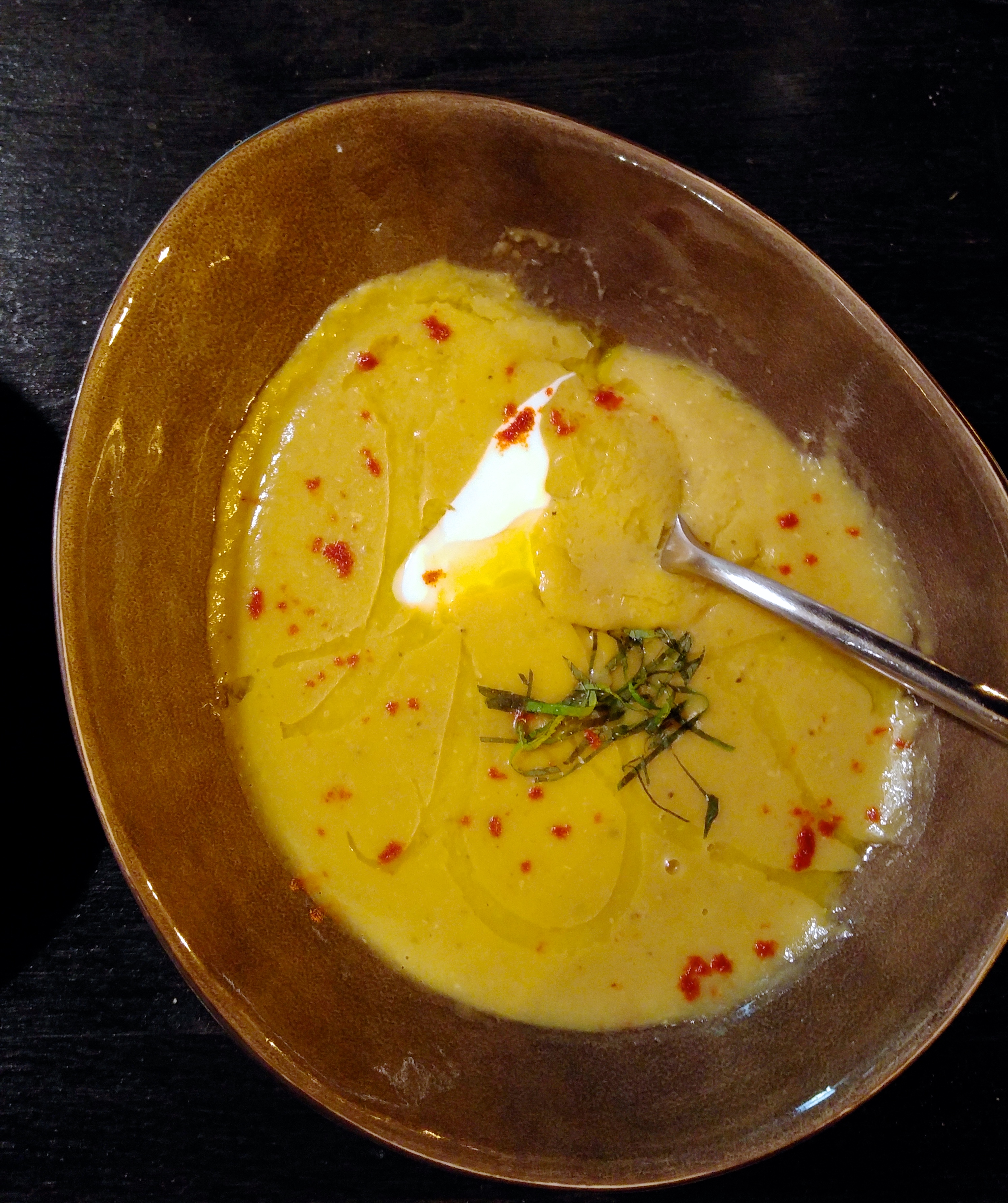 I finally end up this food guide with Dizyngoff, the last restaurant I tried there before to head back to Berlin. The restaurant is relatively new and serve israeli food. Their interpretation of israeli classics is skillfully mastered, the amateurs of traditional dishes will choose the hummus served with shiitake mushrooms, while the ones looking for exotism will probably choose the black bean hummus. The rest of the dishes we chose is also a flawless: the fresh goat cheese with dry figs and honey was divine, but not as much as the lentil soup with yogurt & mint that totally rocks. I ended on a slight note – which is totally ironic obviously, I was rather dying because once more, I had eyes bigger than my stomach – with a black truffle cream couscous risotto more than convincing, and one serving of creamy Matcha cake. I also really loved the decoration and atmosphere at Dizyngoff, which claim to be an optimistic bar!

If you’re looking for more food guides, take a look on The place to be!